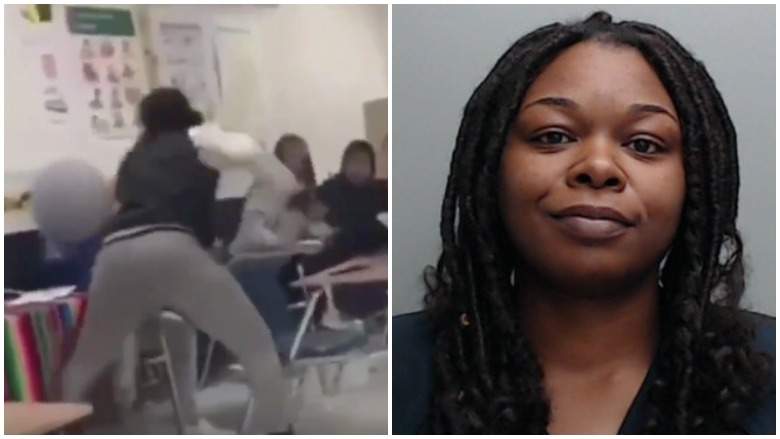 Another day, another violent black on white assault that mass media ignores. This one comes from Lehman High School in Kyle, Texas where a video shows a black woman standing in front of a white student who is seated, and then repeatedly punching her in the face before ripping her out of the chair onto the ground and then stomping on her head. 32 year old Tiffani Shadell Lankford was arrested for the alleged assault and charged with aggravated assault with a deadly weapon, a second-degree felony. It goes without saying that had the roles been reversed that this story would be headlines on all the prime time media outlets and Tiffani Shadell Lankford`s name would be known by everyone. But, not only has this story been ignored by mass media but there has been no protests and rallies against racism, no calls for unity from politicians, no statements denouncing this interracial attack from athletes or the Hollywood crowd, and most importantly- there has been no civil rights group that has stepped up to defend this girl. Why is that?

The denial of civil rights for any group or class of people only ensures their exploitation and victimization. Civil rights and the right to represent your people is not something that should only be afforded to “minorities”. We need legitimate organizations working alongside the Black Caucasus and NAACP, CAIR, La Raza etc in D.C. and across the country. For the past 30 – 40 years those who were supposed to be representing European Americans have said don`t vote, don`t get involved in the system because it doesn`t represent us. What did we get for our alienation? Exactly the nothing we have now. That needs to change. The more you advocate doing nothing because you don`t like the way the laws work against us the more you allow the system to exploit us and discriminate against us. Get out and get involved.