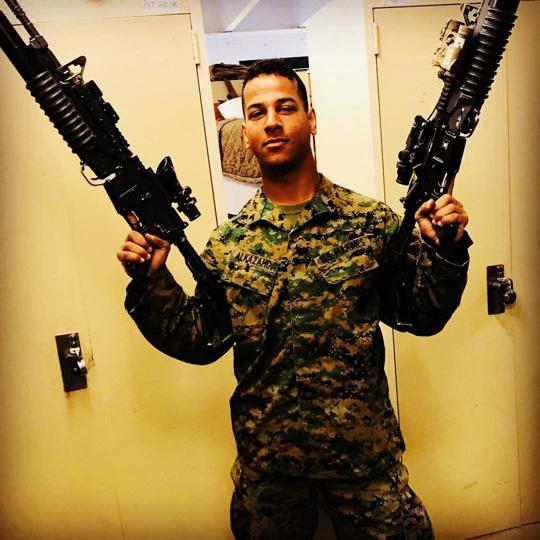 The Omaha World Herald reports that “An off-duty Marine from Nebraska was arrested at Offutt Air Force Base two weeks ago after he tried to enter the base with two semi-automatic rifles, a pistol, a silencer, a bump stock, a vest with body armor and a case of ammunition.” They report that he was stopped because a “…bulletin, issued May 24 by the Nebraska Information and Analysis Center and later obtained by The World-Herald, said Al-Kazahg told another Marine that he would “shoot up the battalion, starting at the barracks,” if he were disciplined for certain misconduct. According to the bulletin, he also mentioned specific Marines he wanted to target.The bulletin quoted NCIS as reporting that Al-Kazahg had previously made “suspicious statements” and been reported for “suspicious activity.” 22 year old Al-Kazahg is a private first class assigned to 3rd Marine Logistics Group based in Hawaii and was on leave at the time of his arrest. In 2016, the Lincoln Police Department issued a caution about Alkazahg in 2016 claiming that the he was “dangerous, has an infatuation with guns and violent acts, and has a dislike for law enforcement,”. The last reports state that he was being held in pre trial confinement in Hawaii.