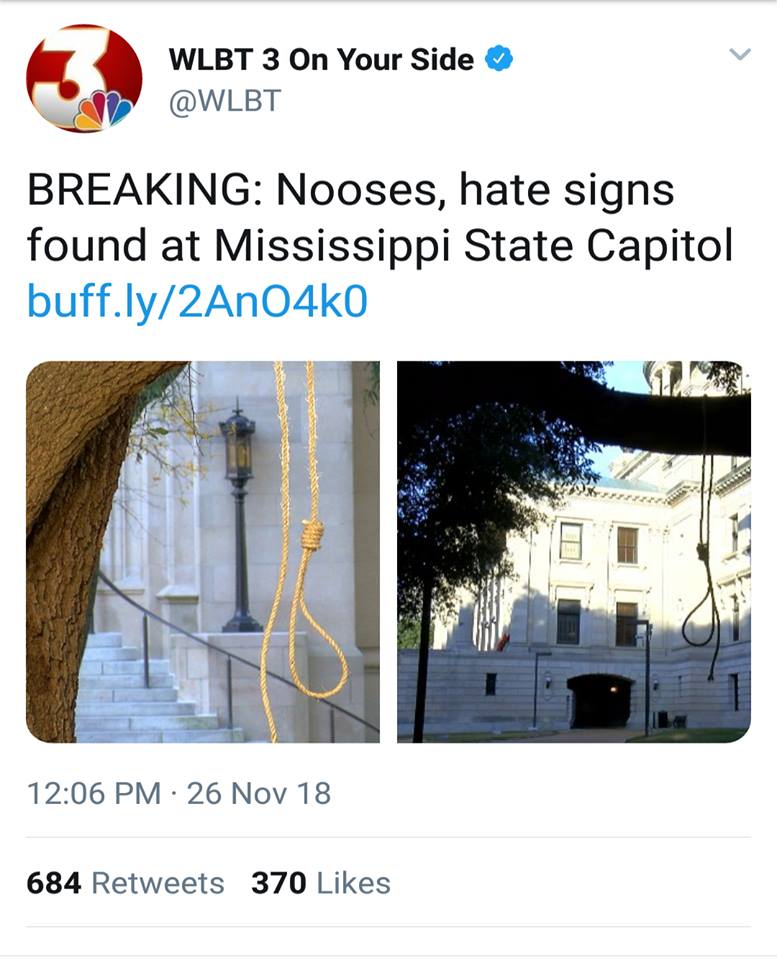 I called it, and anyone who has been paying attention to trends in society should have been able to call it as well, the nooses hung near the Mississippi state capital were put there by democrats. What I didn`t know because it wasn`t reported until later, was that those who did it didn`t try to hide the fact that they did it because it was part of a protest.

The back story to this is as follows- a special election was being held in Mississippi for a senate seat after the former holder retired in April. It was being called a tightly contested race between Republican Cindy Hyde-Smith and Democrat Mike Espy. With Cindy Hyde-Smith being white and Mike Espy being black, and especially with Mississippi being in the deep south, democrats of course played the race card. The main thing they focused on was a comment that Hyde-Smith made that was taken out of context in which she said she valued her relationship with a friend so strongly that she would attend a public hanging with him. This comment was weaponized by the left and used against her in a state “struggling to overcome it`s racist history”.

Things came to a head the night before the election when nooses were found hanging around the Mississippi state capital. The local news reported on it saying that nooses and hate signs were found and then headlines were ablaze nationwide. One far left establishment news outlet reported that “Nooses were found just before a runoff election to determine whether a black man will hold a Senate seat in Mississippi” making the implication that this was a warning from white supremacists. Former DNC chair Donna Brazile (who admitted to leaking debate info to Hillary Clinton during the primary) even got in on it commenting on twitter- “We are better than this!”

What wasn`t reported until later that night was that in reality the “hate signs” made it clear that the nooses were put up as a protest against Cindy Hyde-Smith and lynchings. This omission imo was used to rile up democrats and get them out to vote to “oppose racism”. If this is the case, this is deliberate deception and should be a case for election interference. It`s never been more clear than in the last two years that mass media has been complicit in deception and misinformation in favor of democrats and their agenda. This is why I said in my last post not to let yourself be manipulated by the first thing you see being propagandized by mass media. Step back and look into it from all angles. The truth always comes out.

As an addendum, after finding the nooses Mississippi Governor Phil Bryant said “… there is absolutely no place in our state for these unacceptable symbols or tactics to intimidate others. If we find evidence beyond a reasonable doubt that a federal crime has occurred, these criminals will be swiftly prosecuted and held accountable.” I have to wonder if there will still be prosecutions now that it`s been discovered that democrats put them up. While the exact intent to intimidate may not have been a motive, these “unacceptable symbols” do in fact intimidate people, and this intimidation was exacerbated and facilitated even more by mass media who declined to report the entire story from the get go.