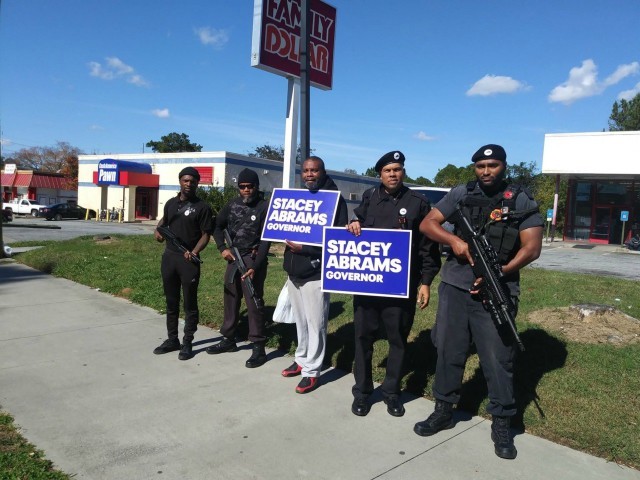 The memes write themselves lol. This past weekend armed members of the black panthers marched the streets and posed for pictures with signs for Georgia`s democrat gubernatorial candidate Stacy Abrams. They did this all while ignoring the irony that Abrams has been called the most radical anti gun candidate in the country. Aside from having a group that exercises their 2nd Amendment right support an anti 2nd Amendment politician, we`ve noted how the democrat parties policies in general are contradictory towards it`s constituency. The same can be said for candidates Andrew Gillum in Florida and Ben Jealous in Maryland who both have support from black voters. Traditionally, the democrat party is the slave party. Their game is to give minorities just enough to keep them voting democrat and then blame republicans for them not having more. LBJ did this by creating the “Great Society” which in turn destroyed the black community. In doing so he was quoted as saying “I`ll have those n*ggers voting democrat for the next 200 years“. Irony abounds still when you look at people like LBJ (who was once supposedly a klan member) and Margaret Sanger who are heroes to democrats despite their background and policies. It`s a sad state of affairs that people will continue vote along racial or party lines with no regard as to how their policies will ultimately affect them. In the case of the upcoming midterms we stated here in a previous post:

In all three cases (Maryland, Georgia and Florida) the left is ecstatic that these people could become their states first black governor. They say this is progress, but the fact is that not only does Florida and Georgia currently allow some of the greatest protections of civil liberties for blacks, but both states have the highest number of black owned businesses of all the states in the country as well. That is true progress. The socialist policies being put forth by both of these candidates would undoubtedly destroy that. How ironic would it be that the states first black governors destroy these businesses with their overbearing polices as well as roll back their civil  liberties? These are things the left does not think about, and honestly probably do not care about as they do not want a successful constituency. If people were successful they would not be dependent on government and in turn they could not control them.

There are however plenty of people waking up to this game. Blexit, Blacks For Trump and the Walk Away Campaign are some of the bigger movements for people leaving the democrat plantation. People like Candace Owens have been challenging the harmful democrat policies and celebrating Trump`s policies which have in fact helped black employment and more. In fact a recent Rasmussen poll put black approval of the job President Trump is doing at around 40%. When you realize that democrats rely on the black vote to stay in power, you`ll understand why they play the race card so often. They don`t really care about you, you`re just all they have to stay in power.