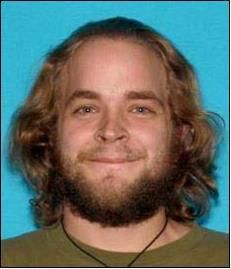 Denver ATF is looking for 27-year-old Kellen Michael Sorber after a federal warrant was issued against him charging him with one count of using fire to commit a felony after allegedly breaking into an Albany County GOP office and torching it. It was DNA evidence left behind that led investigators to him, but not until after questioning some of his fellow employees at Speedgoat Cafe. One of those originally suspected and questioned was Quentin “Q-Ball” Freouf. He was later ruled out but Sorber`s former boss stated It’s frustrating to know Sorber put someone’s life in danger during the attack and then sat idly by as Q-Ball became a suspect. “I’d love to see the guy again so I could make him feel like s—,”. “I hope they catch him. I have no sympathy for him.”

Sorber is a white man, approximately 5’10”, 250 lbs., with green eyes and was last seen with shoulder-length, dark strawberry-blonde hair and a beard. There is a $5,000 reward for information on him.