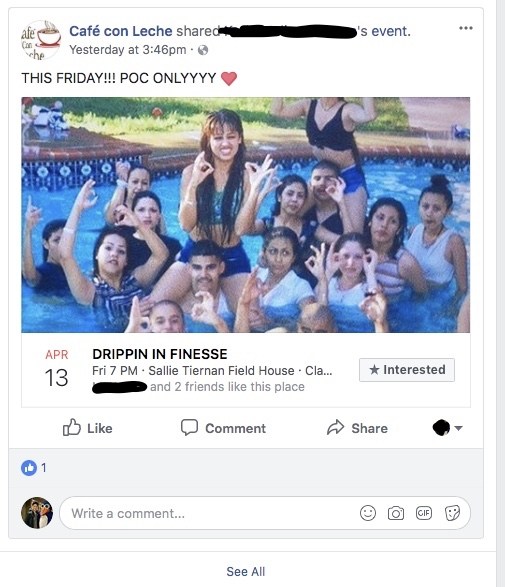 While accusations of white racism fly through headlines everyday, events such as Friday night`s No Whites Allowed Pool Party organized by the Latinx group at Scripps College are ignored. The pool party was hosted by Cafe Con Leche and was claimed to be the first ever POC pool party in Claremont. An archived picture from the now deleted facebook page states that “The event is only open to 5c students that identify as POC“. Such events are common on college campuses nowadays but never receive negative coverage. This needs to change. In the case of Scripps College, the Claremont Independent reports that:

The event, sanctioned by the college, appears to violate Scripps’s anti-discriminatory policy. The policy reads, “Scripps College is committed to a policy of equal opportunity, and no differentiation will be made based on race, color, religion, sex, age, national origin, sexual orientation, veteran status, or the presence of a disability.” This event is clearly advertised as a party for individuals that identify as people of color to the exclusion of white students.

Even if the event is in accordance with Scripps College policy, it may run afoul of federal law. Because Scripps College receives federal assistance, it is bound by Title VI of the Civil Rights Act of 1964. Title VI states, “Schools and colleges that receive federal funds must operate without discriminating when it comes to race, color, and national origin.” Educational programs and services that must abide by this law include recreational facilities such as Sallie Tiernan House Pool. Consequences for violations of Title VI can include loss of any sort of federal assistance. It is unclear whether hosting the pool party after regular hours affects the application of civil rights legislature.