Remember when mass media laughed at President Trump for talking about the crime in Sweden? Well he has been vindicated by far. Read about the rapes, bombings, riots, no go zones and more here. The latest development states just how bad things really are. Sweden`s Prime Minister Stefan Lofven has brought up the idea that the army may be needed to “end a wave of gang violence that has seen a string of deadly shootings”. The article here goes on to state that

Sweden’s murder rate is relatively low in international terms, but gang violence has surged in recent years and Swedes are worried that the police are unable to cope.

In 2016, the latest year for which official statistics are available, 106 people were murdered in Sweden, a country of 10 million.

But Swedish TV reported there were over 300 shootings, mostly in turf battles between gangs over drugs, protection rackets and prostitution.

Four people were shot dead in the first week of this year. One man died after picking up a hand grenade outside a subway station in a suburb of Stockholm.

“People are shot to death in pizza restaurants, people are killed by hand grenades they find on the street,” Sweden Democrat leader Jimmie Akesson said in parliament on Wednesday.

“This is the new Sweden; the new, exciting dynamic, multicultural paradise that so many here in this assembly … have fought to create for so many years,” he said sarcastically. 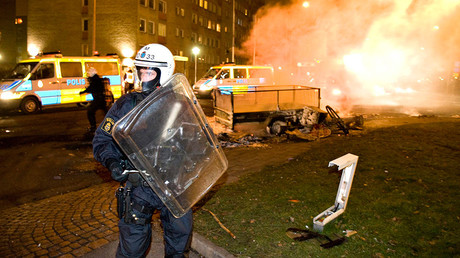