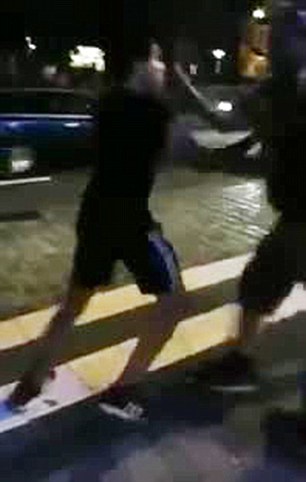 The Daily Mail recently ran a story from Germany in which a group of Germans were taunted and harassed by a mob of foreign immigrants. When it got to the point that the Germans defended themselves, mass media runs a story calling them neo nazis with quotes like “About 100 far-right men and women attacked some 20 asylum seekers”. This is after the “asylum seekers” attacked the cops too, but yet we are to believe they are the victims. The article ends with the statement that the town has seen frequent anti immigrant attacks lately. Well when a group of outsiders invade a country, sexually assault and rape their women, physically attack people and kill people, you are going to get an equal and opposite reaction.

It should be known that if you are a person of European background who stands in defense of his country and people whether physically or politically, you will be called a neo nazi, racist, far right, xenophobe or a ton of other liberal buzz words. The fact is that mass media`s biased agenda has become more and more blatantly obvious in the last few years. Their tricks don`t work anymore.