There will be an awareness march held on February 27, 2012 to arouse the attention of mainstream media to the rapes, murders and other horrendous atrocities our brethren in South Africa endure on a DAILY BASIS!

According to Genocide Watch, South Africa is at Stage 6 Genocide, which is the phase called “Preparation.”  Actual Genocide is Stage 7! You can read more info on that here

Below is an article I posted last year which relates to this project. It`s titled “Freedom Day And It`s Parallels To America” 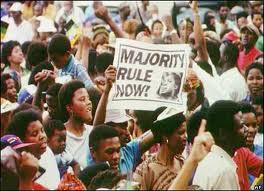 A few days ago the celebration of “Freedom Day” took place in South Africa. Before I get into the gist of this post I have to let you know what Freedom Day actually is. In essence, just like the DREAM Act and other Orwellian termed words, Freedom Day is just another Marxist celebration of the dispossession of whites. What it is, is the day when South African Whites gave up control of their own destiny and elected into power the ANC. As everyone knows this had led to the government sanctioned genocide of South African Whites. I was originally going to make this post to bring attention to this genocide and the complete lack of intervention and outcry from the world wide community, but I have come across another angle that also draws parallels to what is happening here in America…

Here in America we have elected our first non white president. This has caused great celebration and what could relate to “Freedom Day” here as the non white masses saw it as taking over White America. What they don`t realize is that government (no matter what color) is just an extension of big business and has no real interest in helping them. Sure government will continue to dispossess White Americans and bleed us dry for social programs, but instead of  that money going to help non whites the majority of the fruits of our labor will continue to go to those in charge. All the while White America and “racism” will still be blamed for the poverty and short comings of the rest of America.

If we continue down this apathetic road it will lead to the genocide of our people here just like in South Africa. I have reposted the quotes below from an article written about the current black run ANC in South Africa as it shows exactly what is going on here.

But here’s the part of Zuma’s speech that is really scary. It all goes back to the whole business of the two  stage/phase revolution. Zuma stated that the highest priority now was “transformation of the economy”. If we lived in a sane country, which this is not, the highest priority would be: How do we grow the economy the fastest. In the racist black ANC world the highest priority is: How do we steal from the whites the fastest to give to the “black masses” (translation: To the ANC fat cats who are already billionaires but who are happy to receive billions more in the name of the black masses). As my Liberal friend points out with BEE (Black Economic Empowerment) and AA (Affirmative Action) and all the E’s and B’s and all their other bulldust terms, what we see is money being handed out to all the ANC elite and their bumchums.

This is just like Mugabe, like I pointed out in Government by Deception. While Mugabe is busy pointing at the white he says to the blacks: “See those filthy white people they are stealing from you…” meanwhile Mugabe is stealing from the whites and taking it for himself and his pals. The ANC do the same.

As my Liberal friend pointed out, despite years of BEE and all that… its the same ANC-related people who always get the money.

But Zuma’s soft talk of “transformation of the economy” really means: Seize the businesses, capital and assets from the whites and give it to ANC Loyalists who will pretend to receive it on behalf of the “black masses”.

Zuma’s talk is basically just a lot of soft communist talk and nothing more. And that should scare everyone.

The Blacks have failed, the ANC have failed, and in the end, the Whites will foot the bill and pay the price. They will simply claim that they now have no choice but to seize OUR ASSETS… BECAUSE THEY ARE FAILURES!!

And that, my friends, sums up 17 years of ANC rule, and President Zuma’s disgusting speech. Not only are we the ENSLAVED, but we will be BEHEADED AS WELL…