Lyrics: Across The Hudson- H.A.D. (Updated) 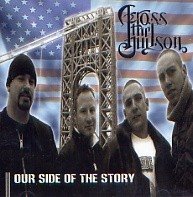 Throwback Post. Reposted on the featured slider in April of 2016 as it relates to the current commie and sjw protests occuring nationally.  The lyrics posted below are from the ‘Our Side Of The Story’ cd by New Jersey`s Across the Hudson. The first thing that captures your attention about this cd is it`s amazingly good unique sound, but aside from the great sound, this cd is lyrically strong on blue collar pride and patriotism… for it was on the backbone of our working class that this country achieved greatness.

The working class of yesterday was one of pride in your work and achievements and there was also a strong sense of national pride that went into building this nation. Today our working class has virtually disappeared. What jobs have not been outsourced overseas have been replaced by cheap labor. Today it is just a struggle to survive.

The lyrics to the song H.A. D. demonstrate the cohesive national pride that the blue collar workers had. It is based on an event that took place over 40 years ago during the Vietnam War when a protest by mainly college liberals and hippies was smashed by an army of construction workers. I have to say here that while I oppose wars that are for nothing more than capitalist gains, I do completely oppose the liberal/ communist/ hippie movement of the 60`s. It is one thing to protest a war, but this movement was taken advantage of by people who had no other desire than to destroy the foundation of our American society. If you do a search for “hardhat riot 1970″ you will see it is evident what direction our politics went in after this era. The majority of stories you will find paint the men who stood up to those who disgraced American society as the evil ones. (Updated Note: There is an informative documentary called Berkeley In The 60`s that shows the type of people that led this movement and their efforts to overturn American society) The lyrics below are a tribute to the blue collar workers who took pride in their country and put a beating on those who wanted to turn it upside down.

Audio clip: Adobe Flash Player (version 9 or above) is required to play this audio clip. Download the latest version here. You also need to have JavaScript enabled in your browser.

A forgotten day in our history
Over 50,000 hardhats took to the New York City streets
And they were met with rocks and evil words of hate
But their later actions would soon prove to be great

Tradesmen stormed the dorm at the university of Pace
And these college cowards ran
No, they weren`t even willing to face
Working men chased traitors down
And cornered them like rats
Then unleashed the fury of a New York City hardhat

All they wanted to do
Was honor friends that served
And they were met with senseless violence
So they gave the traitors what they deserved
So I think of this day and my heart beats with pride
Of how these true patriots stood up
For their best friends that had died!

Another song demonstrating the intro comments to H.A.D. can be found in the lyrics to their song Aware Of Our Surroundings

Aware Of Our Surroundings

Audio clip: Adobe Flash Player (version 9 or above) is required to play this audio clip. Download the latest version here. You also need to have JavaScript enabled in your browser.

Things may not work out, but that`s just life!
There`s one thing that`s certain, it is a man`s pride…
In a time of sell- outs we`re in this to the end
Never test the integrity of a working man…

I believed in justice, my belief went away
Liberals of the past are now the leaders of today
Embarrassing our country, killing all our pride
Embarrassing to what we feel inside…
Never did I think that things would come to this
Here I am slaving for the fucking capitalists…
I was young and proud when I learned a trade and now
The dreams of a working man slowly fade away…
They don`t want to listen to what I have to say
Tell me my beliefs aren`t even relevant today…
I always hated the left, cause I was always quite right
Just a working class American in a working class fight…

My hands are blistered, my time is short
Breaks are limited and labor`s my sport…
I see all the people who sit around everyday
And then they take my taxes and give it all away

It`s just not right! It`s a working class fight!
It`s not about style or how well you dress
It`s all about integrity and mine- Don`t test
Everyday I stand alone, eyes look away from me
A proud individual is who I choose to be
I don`t need your praise or a slap on the back
Just some time with my friends and a decent paycheck
No more fakes are allowed around me because…
A simple working man is who I`ll always be…

Working class pride… What we have inside…
No more we hide