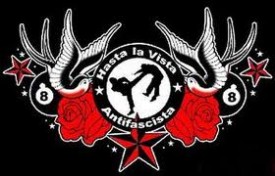 A vicious Marxist gang known as “Antifa” has staged violence attacks all over Europe. The group calls itself “anti-racist” and targets members of right-wing groups. Members of the gang routinely cross national borders to commit violent assaults. One of the ongoing projects of the gang in Germany is to vandalize Thor Steinar clothing stores. The group claims that the Arab-owned clothing line caters to “Nazis” by putting Viking/Norse imagery on some of their t-shirts.

Members of “Antifa” have a gang headquarters called “Hausprojekt Scherer 8″ in an immigrant ghetto in Berlin. Across the street from the Antifa gang house is home base for a violent Kurdish drug gang called the “Street Fighters.”

The following night two members of a band that perform at the Antifa gang house were attacked by Kurds.

Police say the Kurdish gang is well-known to them and all of its members have been arrested for violent crimes in the past. Police say the leaders of Street Fighters, Ahmed A., was recently beaten up by the Berlin chapter of the Hells Angels.

Members of the violent Antifa gang in Berlin. Notice they all wear masks.

Members of Antifa in Berlin, who normally love to scream tough guy slogans to the media, are refusing interviews. The major German newspaper Süddeutsche Zeitung wrote the Antifa website is urging members to stay away from its Berlin gang house. The newspaper quotes a white female “with dreadlocks” as saying she is leaving the area for fear of “Kurdish and Arab mafia.” The newspaper states “the left’s worldview is faltering.”

A similar thing occurred in Cincinnati, Ohio in 2001.

The same thing happened during Cincinnati Race riots. Members of a self-described “anti-racist” gang urged members in e-mails to join the Black rioters. One e-mail told White “anti-racists” to try to get in front of media cameras so it could not be said that the rioters were “all Black.” At least two members of the gang did in fact join the Black rioters and were brutally beaten. A follow-up e-mail later announced that two of their members had been brutally beaten and lamented that the Black rioters did not understand that the “anti-racists” were simply trying to help them. One of the thugs is actually visible in a youtube video made by the CofCC. He is wearing a mask and standing in the middle of a bunch of hard-core black gangbangers waving a sign. He was later brutally beaten for being white after the media cameras left.

Here is the Berlin Antifa gang members one month ago.

This is from the Berlin Antifa gangs’ youtube channel. It was recorded last month. Notice the thugs all wear masks to hide their identity.  Many of the people you see in this video are the actual victims of the rampage by the Kurds. 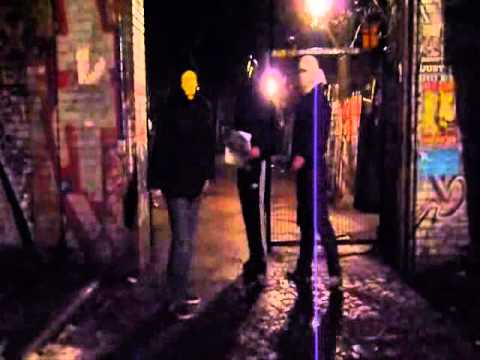