Athens: “The Streets Cry Out For Justice!”

Posted by Label56 in Politics

In the streets of Athens hundreds of residents came out of their homes to protest and shout their anger and resentment against immigrants from North Africa. The tragic events that took place this week rocked Greek citizens.

In the early morning of May 10th, (around 5-6) 44-year-old Manolis Kantara waiting for his pregnant wife, who was soon to give birth to their second child, went to his car parked near to the hospital. This was a very joyous moment for the family and they decided to commemorate the birth of their daughter on video. This would provide souvenirs for a lifetime and wonderful memories for parents. Unfortunately, this camera has become a cause of enormous tragedy. On the way to his car Manolis Kantara was attacked by three individuals who stabbed him three times with a knife in the shoulder, back and neck, then took the camera and fled the scene. Eyewitnesses testified they were young immigrants from Africa, in Algeria or Morocco. Neighbours called an ambulance, whose crew unfortunately was not able to give him assistance. Monalis`s injuries were too severe, he was taken to hospital where he was declared dead.

The same day residents of Athens and friends of the murdered gathered near the site of death, to vent to their anger. In the center there was a riot, several immigrants were beaten as well as two of the anarchists defending Arabs. Leftist media and politicians have dubbed the event “a new crystal night” and tried to discourage people to take part in a peaceful anti immigration procession organized by the nationalists of the Golden Dawn.

May 12 at 16: 00, about 300 nationalists gathered at the National Museum in Athens, to march through the streets of downtown.The parade was spontaneously joined by ordinary citizens, who shouted slogans demanding a severe punishment of murderers and to stop the construction of a multi-cultural society and mass immigration. The march drew more than a thousand people. The Greek authorities over the last three years, took over 500 thousand illegal immigrants from the Middle East and North Africa. According to official statistics, every tenth man living in Greece is a foreigner from outside the European Union.

At the place of the tragic death of an innocent Greek man, dozens of people come daily to pay respects. The young people of Athens on Tuesday organized several groups on their own to administer justice for immigrants and from Africa have been attacked in the streets. A few dwellings were also hit with “Molotov cocktails”. At the funeral, Manolis Kantary read a letter from the archbishop of Athens, Jerome, who was unable to appear in person for health reasons. “My thoughts are with the family now tragically deceased, with his wife and children Manolis Kantary who are victims of irresponsibility in our society,” said the archbishop. For the words of Archbishop can be extended to other countries throughout Europe as Greece is not isolated in this problem. This “democratic” method of mass immigration politics and the thoughtless admission will soon blow from the inside, both demographically and culturally. 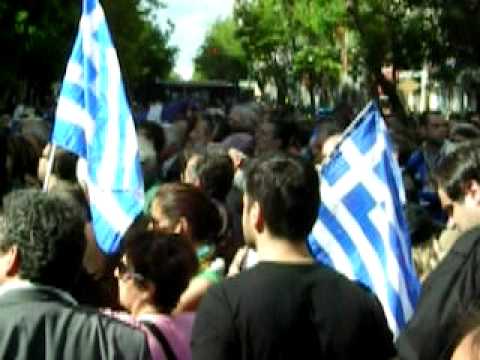