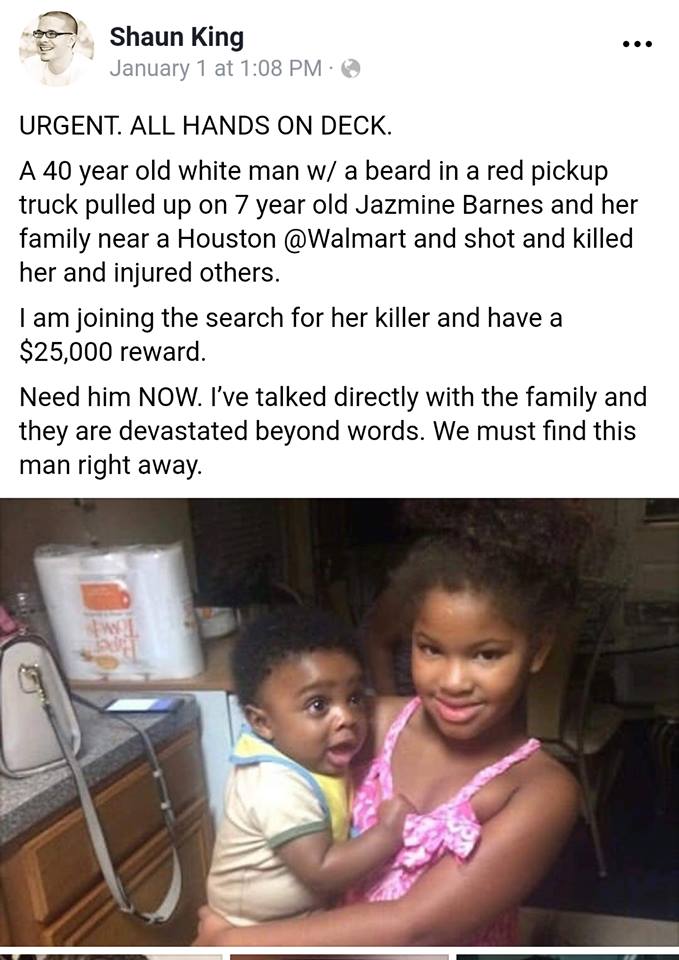 Jeffery Shaun King (who has been accused of being a white guy pretending to be black in order to exploit race issues for financial gain) has gone and done it again. He`s pushed yet another story riling up everyone over white racism when white racism had nothing to do with it. The story is of 7 year old Jazmine Barnes who tragically was shot and killed while riding with her mom and sisters early last Sunday morning. The description of the shooter was a white man with blue eyes in a red truck and led many including Jazmine`s mom to jump to the conclusion that this was a hate crime.

While ignoring other stories of black children, teenagers, adults and even black cops across the country that are killed in violence in inner cities, Jeffery Shaun King (who has been accused of being a white guy pretending to be black in order to exploit race issues for financial gain) immediately jumped on this. Everyday in between his vacation pics and anti semitic stories about how Chuck Schumer is “evil” for introducing a bi partisan bill in defense of Israel, there were posts in remembrance of Jazmine, stories of how he was talking to her parents, stories about what she wanted to be when she grew up, etc. I may be wrong but I don`t remember any of these stories for 7 year old Taylor Hayes who was shot and killed in the same fashion here in Baltimore last summer, or for her 5 year old sister who was shot a few months later.

Along with Jeffery Shaun King (who has been accused of being a white guy pretending to be black in order to exploit race issues for financial gain), the Jazmine Barnes story led to people across the country including Shaquille O’Neal, Houston Texans star wide receiver DeAndre Hopkins and more speaking out and pledging financial support. Ultimately $100,000 was raised in just a week in support of her family and to help find the “white racist killer”. There was even a rally organized that fast to get “Justice for Jazmine” with a “strong turnout from the community”.

As to whether or not this was a hate crime U.S. Rep. Sheila Jackson Lee said “However it is defined, it is a hateful and vicious act with violence and guns on innocent women and children driving for a Sunday morning coffee break,” “That should not be acceptable in this country.” In a conference with the sheriff, Attorney Lee Merrit said “There was no other justification or the motivation that the family could identify, other than a white male who was a complete stranger to them decided to target their family,” “He had a chance to look into the car, see young girls, observe that family, and without any other explanation he decided to riddle the car with bullets,” Sheriff Ed Gonzalez himself said they were focused “on identifying who this individual is, who this coward is”

As it turns out, the white man with blue eyes in the red truck just happened to be in the wrong place at the wrong time and the gunshots actually came from another vehicle. Two black men, 20 year old Eric Black and 24 year old Larry Woodruffe have been arrested and charged with her murder. Apparently neither of them have any connection to Jazmine`s family and that this was a case of mistaken identity in a possible gang hit.

So, once again the race hustlers and mass media got egg on their face pushing another story about racism and hate crimes while exposing their double standards on racism and hate crimes. In reference to Jeffery Shaun King (who has been accused of being a white guy pretending to be black in order to exploit race issues for financial gain), we have put up several posts here where he has done this in the past while at the same time being a horrible “activist” for the black community itself. People need to start calling him out and questioning his real motives as to whether he is there to help the black community, to cause division between the races, or just to profit from it all.

The question also remains as to where this level of national outrage is when white people suffer from hate crimes. Racism, hate crimes and discrimination exists across all borders. Why aren`t there community rallies and statements from local politicians, athletes and the level of mass media outrage when the roles are reversed? Why aren`t there any calls for a day of healing or a rally against hate? It`s just nothing. Why is that?

The denial of civil rights for any group or class of people only ensures their exploitation and victimization. Civil rights and the right to represent your people is not something that should only be afforded to “minorities”. We need legitimate organizations working alongside the Black Caucasus and NAACP, CAIR, La Raza etc in D.C. For the past 30 – 40 years those who were supposed to be representing European Americans have said don`t vote, don`t get involved in the system because it doesn`t represent us. What did we get for our alienation? Exactly the nothing we have now. That needs to change. The more you advocate doing nothing because you don`t like the way the laws work against us the more you allow the system to exploit us and discriminate against us. Get out and get involved.