“Linux developers threaten to pull kill switch”, that was the headline that came though my newsfeed, As someone who isn`t very tech savvy I wasn`t sure what this meant but knew it was something fairly big. As stated in the article, “Linux powers the internet, the Android in your pocket, and perhaps even some of your household appliances.” Until now Linux has been a project that contributors have written code for based on who writes the best code, in other words a meritocracy. However, as social justice warriors care more about having diversity then the best person for the job, they have been “trying to force the Linux project to join the Contributor Covenant since at least 2015.” The article goes on to say that the Contributor Covenant “is an agreement to implement a special Code of Conduct (frequently CoC from now on) aimed at changing the predominantly white, straight, and male face of programming. CC’s Code of Conduct is controversial particularly because it allows anyone to be banned from contributing code for any reason, usually with no mechanism for oversight or accountability.” As we know, social justice warriors are the most easily offended group on the planet and regularly use claims of being offended to have people silenced or removed from their positions. The code of conduct itself is the creation of a self proclaimed social justice warrior by the name of Coraline Ada Ehmke. The true motives of the sjw is exemplified in the tweet she posted below gloating that they basically now have power of who is hired an fired with Linux, and this has not sat well with the current writers. As it turns out, apparently the code writers hold copyrights over there actual code and are now threatening to have them pulled, which as stated looks like it could shut down the internet and more. Read the complete article here for a more in depth explanation. 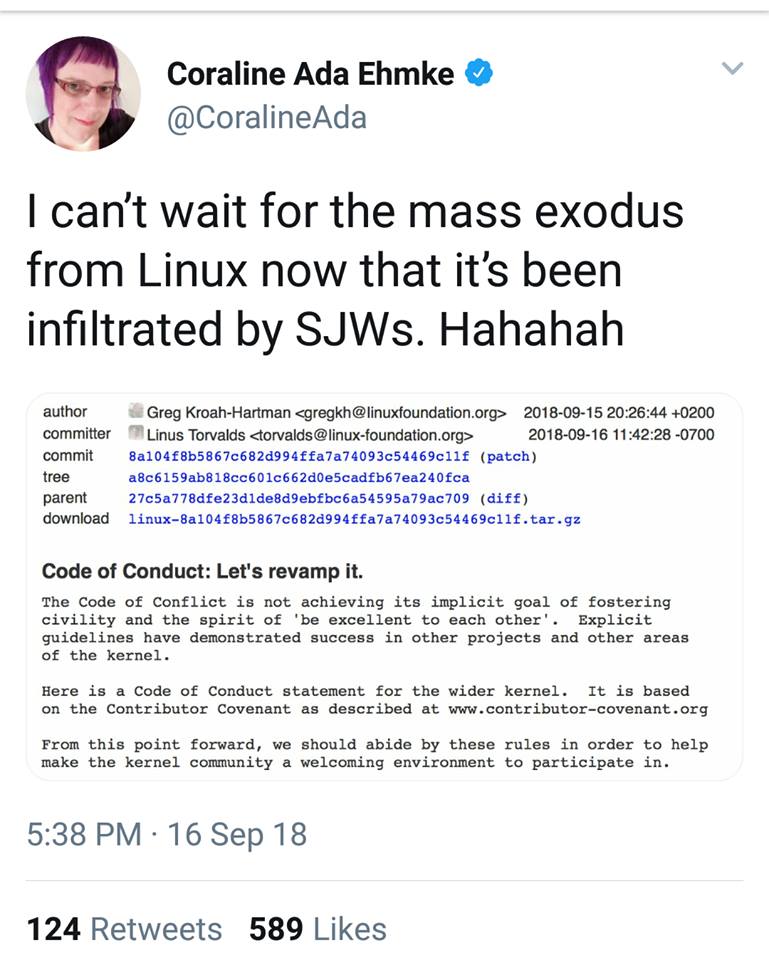 One comment on “SJW`s Could Kill Internet. Linux Developers Threaten To Pull KillSwitch”