The left has gone off the deep end. They support weaponized government and other tactics in undermining our electoral system, they suppress speech they do not like, and even more dangerously, they regularly advocate violence and have carried out assaults and even attempted murder against their political foes. Mass media has been a cheerleader in opposing President Trump and his policies, as well as plenty of elected officials.  The DNC deputy chair Keith Ellison has openly advocated Antifa- the violent leftist group who currently have several members and leaders on trial. Tim Kaine, who demanded that President Trump accept the results if he were to lose the election, said that democrats must fight in the streets after he himself lost the election. His son was later arrested for doing so. Tim Kaine is now running for senator in Virginia against Corey Stewart, and Corey is actively calling him out for being a radical leftist. There are plenty of other examples including Maxine Waters, who has had a history of divisive statements. This past week she stepped it up again and voiced her support for the harassment of her political foes. All this talk of violence and opposition as we said, has caused some dangerously violent actions from democrat and leftists, with some of the more serious being the shooting of Steve Scalise and the attempted murder of Republicans at the congressional baseball practice. A Florida man, Laurence Wayne Key, has since been arrested for allegedly threatening to kill the children of Republican Rep. Brian Mast. 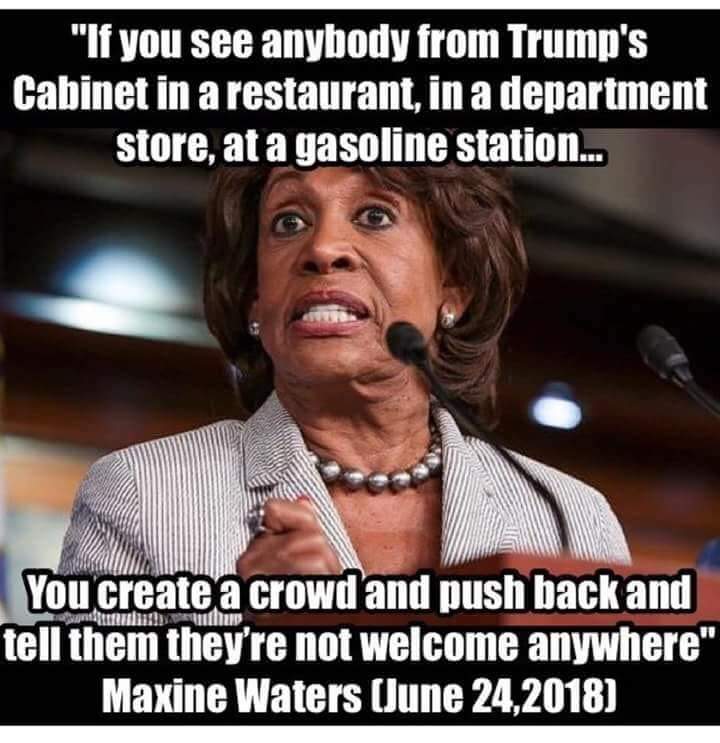 After 2 years of violence and violent rhetoric following the election of Trump, people are finally starting to speak out, noting that the left is escalating this to a point of no return. Based on this, a Republican lawmaker has now introduced legislation to have Maxine Waters resign because of her rhetoric. 2018 has been called the year of the boomerang by Sean Hannity because the Russia investigation that was intended to remove Trump has in actuality exposed the corruption of those investigating him. Based on that, it would be humorously ironic that after 2 years of Maxine Waters demanding Trump be impeached that she herself be forced to resign. It would make the year of the boomerang even more ironic. In closing however, if the left keeps up their violent activities they will eventually push too far. The boomerang of violence that they are throwing is one that is going to be awfully dangerous when it comes back to them.