Racism At UMD College Park? Black Student Says She Only Saw A Sea Of White Faces & Should Have Went To An HBCU 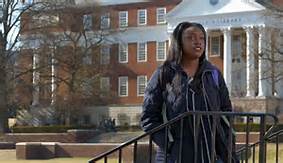 A recent article from the local BS (Baltimore Sun) lamented the low black enrollment at the University of Maryland College Park. The article starts with a black woman- Sabrina Christian, who says that on her first day of school she stepped out of her van and only saw a sea of white faces. She says this made her regret her decision and wished she had gone to an HBCU instead. First off, this is a disgustingly intolerant attitude printed nonchalantly by the Baltimore Sun with no reprimand to it. Had this been a white student saying they were upset at seeing a sea of black faces the article would be up in arms about racism. The college would be forced to address this and the student would most likely be thrown off campus with the college issuing a statement saying that they are a place of inclusiveness, that such intolerant ideas are not welcome. At the least they`d be forced into a campus diversity reeducation camp. In another instance of intolerance, another student who didn`t want to be around a sea of white faces- Michelle Sherman decided to go to a different college. She said of UMD that “The demographic of the school just wasn’t what I was looking for”. “For college, I wanted to be around people who are like me and dealing with the same things as me.” Intolerance and prejudice seems to be a one way street.

Back to the article, it states that UMD College Park had the lowest percentage of African-American students of the 11 schools across the University System of Maryland.. Well, if they had more than another college would have the lowest. This is how math works, but then again, math is racist.

Now, on to the theory of why black enrollment is low. Any guesses? If you guessed the catch all excuse of racism, you are correct! The claim is that past instances of racism are to blame for keeping blacks away. The main instance being used to feed this narrative happened last year when a white guy stabbed a black guy, ultimately killing him. The events around this story as I have read them are as such- A white guy – Sean Urbanski, was walking down the street obviously drunk or on drugs. A group of people were standing in front of him, at which time he said “Step to the left if you know what`s good for you”.  One man- Richard Collin III refused and as a result was stabbed and killed. There was no indication that Collins was targeted individually or that race or anything else was a factor. He just happened to be the one who didn`t move. Furthermore there were no hate crime charges filed because there was no basis for it. This would be just another homicide except that mass media stepped in and declared Urbanski was a white supremacist solely because he belonged to an alt right facebook group. They used this one group that he belonged to on social media to set the narrative that this was a racially inspired hate crime. It was after this mass media conviction that social justice warrior`s banded together in a lynch mob and demanded that he be charged with a hate crime, which he then was. Again, this was with no proof of motive, it was just just based on mob rule. In reality, the only actual hate crimes that have occurred on campus, aside from students confusing a piece of trash with a noose, were committed by other blacks. Read those here and here. To sum it up, UMD College Park has the lowest black enrollment, yet the highest number of fake hate crimes committed by blacks.

Nevertheless they seem to have a crisis on their hands in the form of low black enrollment. Even though almost half of the freshmen class were minorities (46%), black enrollment is the priority. What is one way they want to fix this crisis aside from spending millions of dollars on programs to fight “racism”? For the sake of diversity, they suggest raising tuition on the wealthier students in order to subsidize the tuition of poorer students.